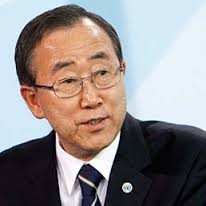 The world has changed since we last marked International Ozone Day. We now have our 2030 Agenda for Sustainable Development, which will foster equitable inclusive growth and further the well-being of people and our planet.  On climate change, the Paris Agreement marks a historic turning point in our common journey towards a secure and sustainable world.

Now, we must turn ambition into action, and strengthen climate protection by harnessing the power of the Montreal Protocol to make progress in slowing the near-term warming caused by hydrofluorocarbons (HFCs), the fastest growing of the greenhouse gases.

Next month, in Rwanda, we have an opportunity to do exactly that, when national delegations gather to reach a global consensus on phasing down HFCs under the Montreal Protocol.  Years ago, HFCs were widely adopted as an effective alternative to products that were damaging the ozone layer, particularly those used in refrigeration and air conditioning.  However, science has revealed that, while HFCs have greatly reduced the threat to the ozone layer, they are an extremely potent greenhouse gas.  With their use increasing rapidly, we must take decisive action – just as we previously did to put the ozone layer on the path to recovery.

Phasing down HFCs would provide considerable benefits.  It would avoid up to half a degree of global warming by the end of this century, providing a major boost for the Paris Agreement, and it could also significantly improve the energy efficiency of some alternative refrigerants and technologies.

A global problem requires a global solution.  I am confident that any obstacles can be overcome, having already seen nations use the Montreal Protocol to avert up to two million cases of skin cancer a year and save many more people from the suffering caused by cataracts.

By using the Montreal Protocol regime to phase down HFCs, we can complement other efforts to reduce carbon dioxide and other greenhouse gas emissions under the UNFCCC process.  On this International Day for the Preservation of the Ozone Layer, let us remember how much has already been accomplished, and commit to do more to protect our atmosphere.  By working together, we can build a safer, healthier, more prosperous and resilient world for all people while protecting our planet, our only home.