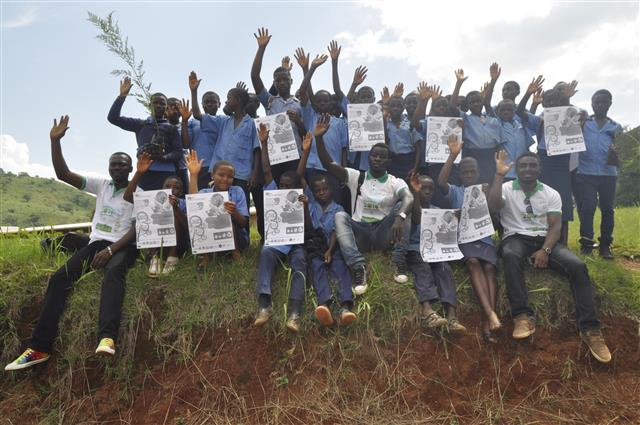 Early morning, Friday 22nd April 2016, the Earth Day Team headed to Government High School Kedjom Keku (Big Babanki) in Tubah Sub Division of the North West Region of Cameroon where they sensistized and educated more than 500 students of Government High School Kedjom-Keku about "Earth Day", the need to plant trees and called on the students to advocate and act to stop deforestation of the Tubah Upland Forest which is a host to diverse endangered and endemic flora and fauna such as the Newtonia camerunensis and Pan troglodytes ellioti.

The Earth Day Team also delivered the YALI Network course "Understanding Climate Change" to students of the institution as well as out up educative Earth Day posters strategic locations of the school campus.

Later during the day, the Earth Day Team screened the environmentally friendly movie, Dr. Seuss' The Lorax with the students and helped them draw a Green lesson from the movie. After watching the movie, the students of the institution pledged to plant trees and become guardians of the Earth.

It was at this point that the Earth Day Team conducted a symbolic tree planting exercise led by the Vice Principal incharge of Extracurricular Activities, then the Earth Day Team and finally students of the institution. The Earth Day Team then donated 150 Ornamental Trees to be planted in the school campus as well as congratulated the Green Club of the school for establishing a Tree Nursery and encouraged them to keep up with the green spirit.

The team had an amazing time at Kedjom-Keku and later on moved to the Alliance Francaise hall at Veterinary Junction, Bamenda where they screened another eco-movie, WALL•E to more than 100 students of 5 Schools. The movie was followed by a question and answer session as well as lessons drawn from the movie. This was followed by a solemn call to action from the Director of Alliance Francaise who tasked the students to be like Wall.E and become guardians of the Earth.

On Saturday 23rd  April, the Earth Day Team continued her activities with a  1hour radio program from 10:00 - 11:00AM at Abakwa FM Radio, FM 99.0 during which the team comprised of Yembe, Conrad, Jerome, Leona, Herman, and Ngalim educated the entire population of the North West Region about Earth Day and called on them to plant trees for the Earth.

More events such as "A Night at the forest" are upcoming.

Earth day is a very special day to us at The Greens. On Earth Day, the Founder/President called on all citizens of the Earth to become medicine to Mother Earth as per his Earth Day message below

Climate change is a matter of life and death. To this effect, I call on every citizen of this precious planet to start or continue talking green, teaching green and living a green life.

To celebrate Earth Day, let us give tree gifts to Mother Earth as a sign our appreciation to her. Long live humanity, Long live planet Earth. Happy Earth Day 2016."

Earth Day is celebrated every year on April 22, during which events are held worldwide to demonstrate support for environmental protection. It was first celebrated in 1970. Learn more about Earth Day on the Earth Day Network Website.

Feeling Inspired? Join us in our upcoming activities to continue to celebrate Mother Earth or visit our Events Page to see many other Events we'll be celebrating this year.