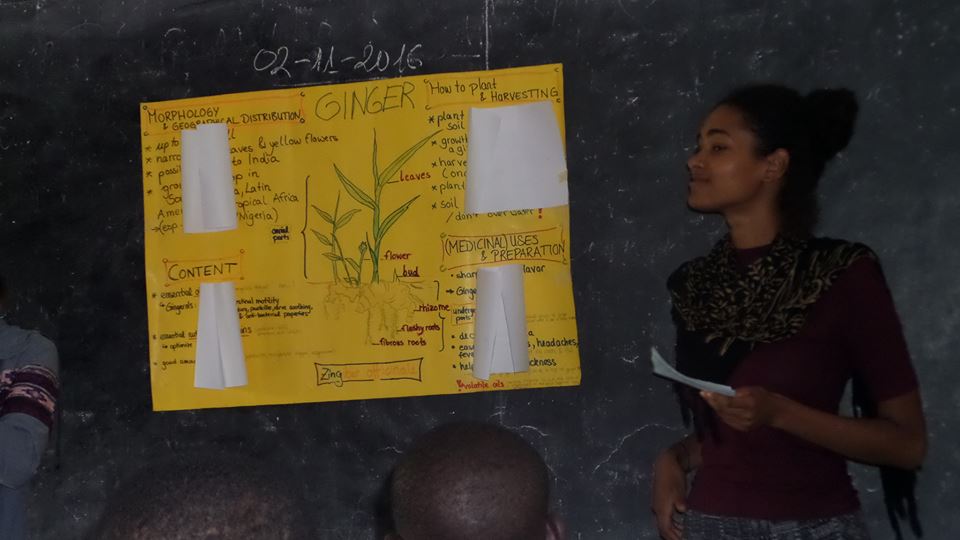 Week Three of The Herbal Gardens for Schools HG4S

On Wednesday the 2nd of November 2016, The Greens team set up on another phase of the HG4S project. The day kicked off with a brief meeting on the evaluation of the previous sessions and plan for the day. The team arrived Kedjom Keku at about 1:30pm and at 2:20pm, the club session started with an interesting game called “Devinete” that was facilitated by one of our team members Charlotte. This was very relaxing as the students participated happily and it was a great time of fun.

The session continued with the actual presentation of the ginger plant, that was facilitated by two of our team members; Malika and Angelika. They used a poster to explain the morphology of the ginger, its scientific and common names, the various uses of the ginger, laying emphases on its medicinal value and how the ginger  can be planted and harvested.  The lesson was equally very participatory from the students, as they asked so many questions and got clarifications from the facilitators.

Immediately after the lesson, came the time for practical work. This part of the session began by the splitting up of the classroom into smaller groups that was coordinated by Stan. Each of these groups are to be responsible for a particular ginger pot, they will be in charge of watering and caring for the pot and the ginger as it grows. There were in total five groups with about 7 students per group.

When these groups were all formed, they moved out of the classroom, to learn how to cut the tire for planting. This was demonstrated by Franklin.

After learning how to cut, the students all moved to the planting spot, withy their already cut tire in their various groups, led by Franklin, to plant.  The garden was prepared and the tires filled by the students with soil, who were later reminded on how to plant and they all planted. Every student equally went home with a ginger seedling, which they planted back in their homes.

It all ended in a sugar cane eating session, and the team of seven left GHS Kedjom Keku at 4:30, together with the students and all looking forward to the next week’s session.

On Thursday 3rd November 2016, it was a team of six (6) environmental warriors from The Greens that set out for Government Technical School (GTC) Nkeung  on Thursday November 2nd 2016 as from 1pm for another club session. With the presence of over 70 students, the club session for this day started with a very energetic game that came from Stanley Sheni.  The students were all exited with the game.

The session further continued with the splitting up of the class into smaller groups that will each plant in a pot and take care of the plant as it grows. Each of these groups was to elect a group leader among themselves and possibly give a name to their group. Nine groups were created in total with an average of seven students per group.

There was a heavy down pour for about 20 minutes, that delayed the planting session, but it was an opportunity for a second game, that kept the students warmth and happy. It was equally an opportunity to collect poems, sketches and songs from students who had already written. Everyone was amazed at how creative these students are with the so many poems and songs they submitted on that day.

After the rain had stopped, it was time to plant… the students, together with one of their discipline masters, moved in their various groups to the planting spot and every group planted a ginger in their pot. All the students equally went home with ginger seeds, to plant in their various houses.

At 4pm, the team left GTC Nkeung, fulfilled and happy, because the objectives for that day were met.

On Friday November 4th 2016, it was another chance for The Greens team to “Paint The World Green” as they moved over to CAMSCI Nursery, Primary and Secondary school for another club session with the students of the school. The club started at its usual time; 2:10pm, with 33 students in attendance.

The session as usual was launched with a game that got the students really exited and made the class really funky. The game was later followed by a presentation of the ginger plant, its morphology, content, uses and how to plant and harvest the ginger plant. This section was facilitated by two amazing ladies from the team Adeline and Charlotte. The lesson was really interesting as the student copied nots and asked question.

The lesson was followed by a planting session that came just after the class was split into groups of five, with eight persons per group, who were all responsible for a pot of ginger an had the task of ensuring that ginger grows strong and healthy. The students in each group, carried a tire to the garden, in which they filled soil, planted their ginger plant and then watered. After planting, they all went home exited and looking forward towards the next week’s club session.